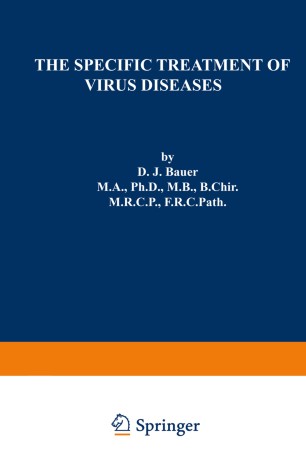 The Specific Treatment of Virus Diseases

In comparison with antibacterial chemotherapy the clinical use of specific antiviral drugs is a fairly recent development. By the 1950s a number had been discovered, but their clinical application was delayed until 1962, when methisazone was used for the treatment of infective complications of smallpox vaccination and idoxuridine in the treatment of herpetic keratitis. In retrospect the reasons for this slowness in development is now evident. It was due in large part to the prevailing view held at the time that virus infections could never be treated with specific agents, since the multiplica­ tion of virus is so closely integrated with the metabolic processes of the host cell that specificity of action seemed impossible of achievement. In contrast, bacteria were independent entities with metabolic systems differing widely from those of the mammalian host, which afforded points of attack by specific agents which had no action upon mammalian systems. Although the mode of action of the sulphonamides and penicillin was not known for some time, they afforded perfect examples of the success of this mode of attack.