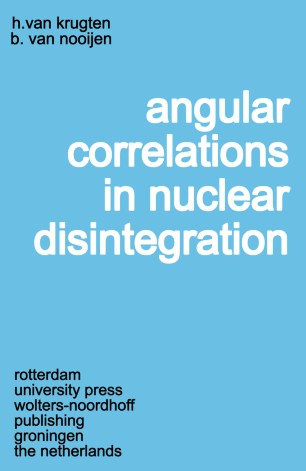 Proceedings of the International Conference on Angular Correlations in Nuclear Disintegration Delft, The Netherlands August 17–22, 1970

In 1969 we feit that the subject of angular correlations in nuclear disintegrat­ ion had received little special attention at international conferences. It is true that perturbed angular correlations had been discussed at a smalI, highly - specialised meeting at Uppsala in 1963 and that in 1967 certain aspects of perturbed angular correlations had been considered at a conference on hyperfine structure at Asilomar. However, both conferences were very limited in scope from the point of view of a low - energy nuclear physicist. Besides, since these conferences were being held, the field of perturbed ?ngular correlations had received new impetus from the still ex­ panding application of the implantation of radioactive isotopes in suitable environ­ ments, from the construction of large superconductive magnets, etc. Meanwhile, the technique of measuring correlations between beta particles and circularly polarized gamma rays had been developed to such a degree that they lent themselves to the in­ vestigation of beta decay, nuclear structure and charge dependence of nuclear forces. The systematic study of heavy elements had increased the import an ce of alpha-gamma angular correlations which present their own specific problems. Theoretical internal conversion data had become available to such an extent that electron -gamma direct­ ional correlations became an important tool in the investigation of nuclear structure: in a large number of cases it is more advantageous to study electron -gamma corre­ lations instead of the commonly measured gamma -gamma directional correlations.