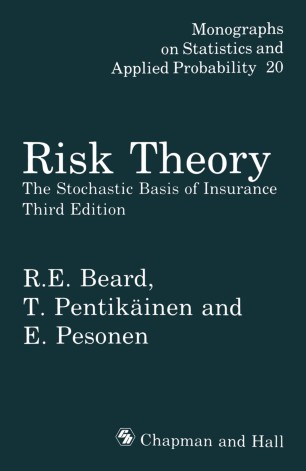 The Stochastic Basis of Insurance

Part of the Monographs on Statistics and Applied Probability book series (MSAP, volume 20)

The theory of risk already has its traditions. A review of its classical results is contained in Bohlmann (1909). This classical theory was associated with life insurance mathematics, and dealt mainly with deviations which were expected to be produced by random fluctua­ tions in individual policies. According to this theory, these deviations are discounted to some initial instant; the square root of the sum of the squares of the capital values calculated in this way then gives a measure for the stability of the portfolio. A theory constituted in this manner is not, however, very appropriate for practical purposes. The fact is that it does not give an answer to such questions as, for example, within what limits a company's probable gain or loss will lie during different periods. Further, non-life insurance, to which risk theory has, in fact, its most rewarding applications, was mainly outside the field of interest of the risk theorists. Thus it is quite understandable that this theory did not receive very much attention and that its applications to practical problems of insurance activity remained rather unimportant. A new phase of development began following the studies of Filip Lundberg (1909, 1919), which, thanks to H. Cramer (1926), e.O.