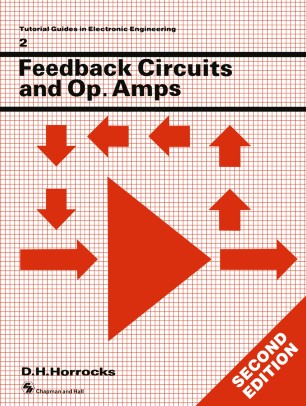 Feedback circuits in general, and op. amp. applications which embody feedback principles in particular, playa central role in modern electronic engineering. This importance is reflected in the undergraduate curriculum where it is common practice for first-year undergraduates to be taught the principles of these subjects. It is right therefore that one of the tutorial guides in electronic engineering be devoted to feedback circuits and op. amps. Often general feedback circuit principles are taught before passing on to op. amps., and the order of the chapters reflects this. It is equally valid to teach op. amps. first. A feature of the guide is that it has been written to allow this approach to be followed, by deferring the study of Chapters 2, 4 and 5 until the end. A second feature of the guide is the treatment of loading effects in feedback circuits contained in Chapter 5. Loading effects are significant in many feedback circuits and yet they are not dealt with fully in many texts. Prerequisite knowledge for a successful use of the guide has been kept to a minimum. A knowledge of elementary circuit theory is assumed, and an under­ standing of basic transistor circuits would be useful for some of the feedback circuit examples.