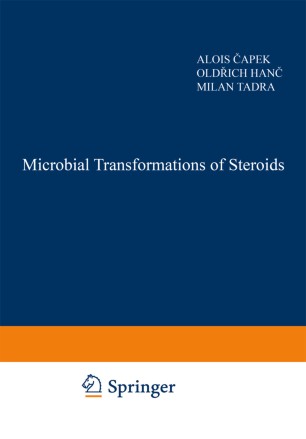 Fundamental studies of steroid compounds have begun approximately thirty years ago with the solution of structures of cholesterol and bile acids. This field has been receiving more attention when the structures of the principal steroid hormones, aglycones of heart glycosides, sapogenins, steroid alkaloids, toad poisons have been established. An intensive interest in these derivatives of cyc1opentanoperhydrophe­ nanthrene was determined especially by practical viewpoints, notably by attempts to prepare by synthetical economical procedures a series of steroid hormones and their biologically active derivatives, further by theoretical viewpoints. Biochemistry of steroids was developing in its beginnings by studies of meta­ bolites of steroid hormones in animal organism and soon has brought a number of practical results that could be used also in medical diagnostics. Considerably later, the metabolism of steroid compounds was followed also in microorganisms, again in connection with the practical problem to aid to economical syntheses of some steroid hormones. Two names are of primary importance for the pioneer works in microbial transformations of steroids, that of the Italian worker L. MAMOLI who first realized the microbial biosynthesis of testosterone from dehydroepiandro­ sterone, and of the American chemist and microbiologist D. H. PETERSON, who has contributed by his fundamental experiments in microbial hydroxylation of steroids to the position eleven, especially to the synthesis of cortisone. Microbial transforma­ tions of steroids nowadays offer a valuable tool in the preparation of series otherwise difficultly accessible steroid compounds.