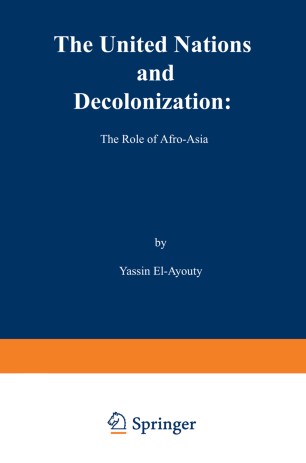 The United Nations and Decolonization: The Role of Afro — Asia

When the United Nations' Charter was signed in San Francisco in 1945, the number of African member states of the Organisation was only 4. By the end of 1960 it had risen to 22. Today it is 41. How has this come about? The answer is given in this valuable book by Dr. Yassin EI-Ayouty. The handful of Asian and African countries who had the privilege of foundation membership made it their business to see to it that their brethren who were still under the colonial yoke attained their freedom and independence as soon as possible and, in the meanwhile, that they were treated with decency and fairness by their colonial masters. It was a tough assignment. The struggle was long, requiring a great deal of patience and endurance. It was at times fierce, requiring much dogged resolution. It also called for the deployment of intellectual agility ofthe highest order. Fortunately all these qualities were available in the rep­ resentatives of Asia and Africa who led the great struggle. These dis­ tinguished delegates also demonstrated a wonderful degree of solidarity which has, happily, become an Afro-Asian tradition at the United Nations. The battle began even before the Organisation had itself become a fact. It would have been a more difficult struggle, had there been no provision in the Charter at all in respect of colonies, by whatever name called.