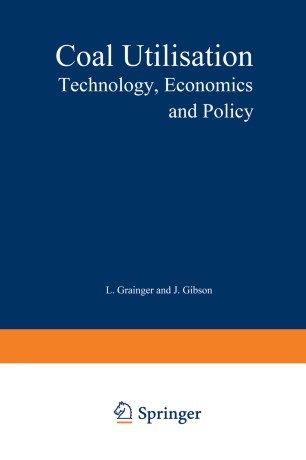 The authors who have collaborated in writing this book have also worked together for more than a decade in promoting Coal Utilisation R&D. They bear a substantial responsibility for the way the policy of the National Coal Board in this field has developed since 1966 and, more directly, for the programme of work at the Coal Research Establishment, Stoke Orchard, near Cheltenham. After a period of relative neglect, R&D on Coal Utilisation has flourished in recent years, both in extent and the importance ascribed to it. A large amount of technical data has been obtained from the pioneering experimental work and this will form the foundation on which vast new industries can be based. The timing and organisation of the application of technical information into these new coal conversion industries represents, in the authors' view, the most important question in the whole field of energy, which is now widely recognised as a vital aspect of social and economic development. The scale of the new coal utilisation enterprises will be greater, and their success more critical, than that of any other development in the field of energy, including that of nuclear power or the renewable resources. This book is, therefore, not directed specifically at technical experts in the field of coal utilisation, and in particular it is not intended to enlighten those who specialise in particular sections of this technology.