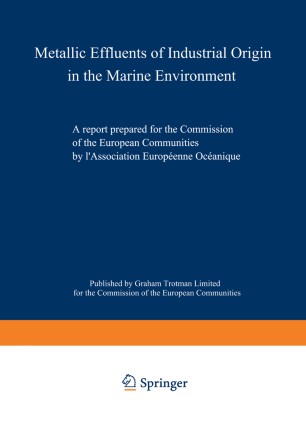 Metallic Effluents of Industrial Origin in the Marine Environment

Based on a unique industrial European membership, the European Oceanic Association, "non-profit Association has as its object the pooling of talents, resources and ex­ perience in the marine field with the purpose of promoting in Europe a concentration of efforts to foster the study and exploration of the seas in the light of their industrial exploitation" (articZe 2 of the statutes). The major concern of protecting the marine environment, whilst at the same time taking into consideration the present constraints on economic and industrial develop­ ment, has led the European Oceanic Association to establish constructive contacts with the Commission of European Communities. Following an interview in November 1972 with leading representatives of the Commission of European Communities and with the heads of the Environment and Consumer Pro­ tection Service, contacts were established which resulted, in May 1973, in the signing of a contract for studies between the Commission of European Communities and the European Oceanic Association. The essential point of the contract granted to the Associa­ tion was: " a contribution to the study of a preventative technology with the aim of arresting the deterioration of the marine environment by limiting and controlling present and future wastes". As a result of working groups between interested members of the Association, an area of study was chosen, comprising: - specific subjects relative to polluting elements or groups of elements, l.e: · chromium, · cadmium-zinc, · cyano-metallic compounds; - more general studies concerning monitoring systems; - specific and general recommendations.