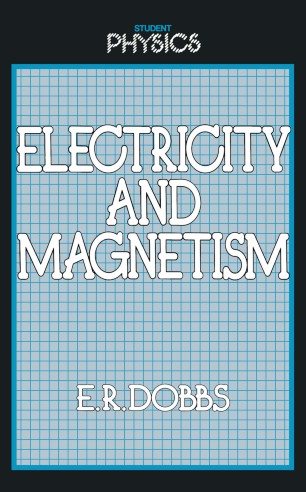 Electromagnetism is basic to our understanding of the properties of matter and yet is often regarded as a difficult part of an under­ graduate physics course. In this book answers are developed from first principles to such questions as: What is electricity? What is electromagnetism? Why are some materials magnetic and others non-magnetic? What is magnetism? Physics answers these questions in two related ways. On the one hand the classical explanation is in terms of classical concepts: electric charge q, electric and magnetic fields (E and B) and electric currents. On the other hand the microscopic (or 'atomic ') explanation is in terms of quantum concepts: electrons, nuclei, electron orbits in atoms, electron spin and photons. Microscopic explanations underlie classical ones, but do not deny them. The great triumphs of classical physics are mechanics, gravitation, thermodynamics, electromagnetism and relativity. Historically they began at the time of Newton (seventeenth century) and were completed by Maxwell (nineteenth century) and Einstein (early twentieth century). Microscopic explanations began with J J. Thomson's discovery of the electron in 1897. For most physical phenomena it is best to seek a classical explanation first, especially phenomena at room temperature, or low energy, when quantum effects are small. Although this text is primarily concerned with classical explanations in a logical, self-consistent sequence, they are related to microscopic (quantum) explanations at each stage.