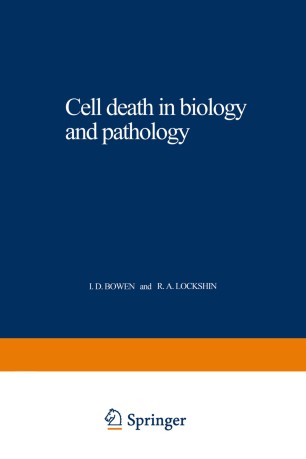 Cell death in biology and pathology

It is clear that lysosomal enzymes often play a role in the destruction of the cytoplasm, but very few authorities feel that they initiate the process (Chapters 1, 2, 3, 5 -8, 12, 13). The cells show many forms of damage, and sometimes even complete destruction, before Iysosomes become a dominant part of the environ­ ment. What initiates the process is still unclear, although in several instances it appears that the death of a cell may arise from anyone of several pathways (Chapters, 10, II). It is rather interesting that evolution has chosen to achieve the same goal by different means. Apparently no one point is exceptionally or pre­ ferentially vulnerable, though a common pathway, such as permeability of the plasma membrane to calcium (Chapter 7), might currently be too subtle for routine identification. Factors which affect membrane stability and which induce mem­ brane bending can lead to blebing, cell fragmentation and death. Thus, more work on the changing chemistry of the plasma membrane in relation to environmental fluctuations would be welcomed. Space requirements and the major orientation of the book forced the exclusion of several very interesting topics: an evolutionary treatment of the advantages of cell death as a means of eliminating vestigial organs or embryonic scaffolding; or consider­ ation of the merits of body sculpting by cell death rather than cell growth.