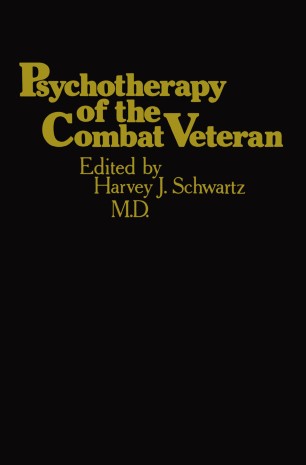 Psychotherapy of the Combat Veteran

AN OVERVIEW OF THE PSYCHOANALYTIC APPROACH TO THE WAR NEUROSES The survivors of traumatic events have long been known to suffer psychological sequelae. Of all possible stressors, combat is one of the most devastating. Wartime exposes its victim to a myriad of stimuli that are far beyond those of civilized life. The impact that remains can affect generations to come. In recent years there has been a paucity of research on the long­ term effects of battle. Particularly after the recent war there was initially an inclination to minimize the psychological impact of combat. It was only after concerted effort by a few dedicated clini­ cians that formal recognition was granted to the current version of the war neuroses. In the parlance of the day it was called the Post­ traumatic Stress Disorder (Figley, 1978). This phenomenologic diagnosis has been instrumental in bringing the necessary attention to this condition. Its applicability has been tested across a wide range of stressors, from man-made to natural. Few workers in the field now doubt the power of traumatic events to leave a profound impression on the victim. Contrary to previous thought, it has now been found that this imprint often becomes a chronic scar. Copyright © 1984 by Spectrum Publications, Inc. Psychotherapy of the Combat Veteran, edited by H. ). Schwartz.