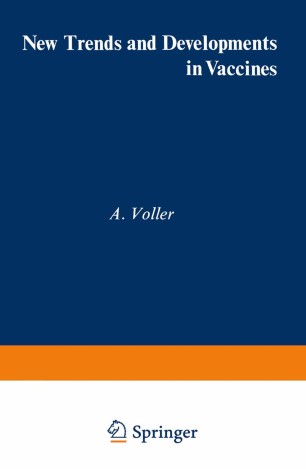 New Trends and Developments in Vaccines

It was not too long ago that many physicians and biomedical scientists felt that the era of 'vaccines' for protecting mankind against infectious disease was coming to an end. During the 1 940s and 50s the widespread use of newly developed antibiotics and antimicrobial chemotherapeutic agents suggested a new era in medicine, i. e. the control and eventual elimination of all infectious diseases, at least those caused by bacteria, by' chemical means. The magic 'bullet' proposed by Paul Ehrlich in the early 1900s seemed to be the method of choice for controling infection. However, it is now quite evident that those high expectations were unwarranted. Although many acute infections, especially those caused by pyogenic cocci, have been controlled by antibiotics, it is quite evident that infectious diseases, even those caused by bacteria, still are a major problem. Thus, the old 'standby' of preventative vaccination is making a strong comeback, not only for viral but also for bacterial infections. However, except for a relatively small number of viral diseases and those bacterial diseases due to toxin elaborated by microorganisms rather than invasion and replication of the microbe per se, preventative vaccination still has not fulfilled the expectations of their proponents. There has been a recent resurgence of interest concerning all aspects of vaccines, not only their preparation and administration, but also the nature and mechanism of the host immune response to the constituent micro­ organisms and their products.