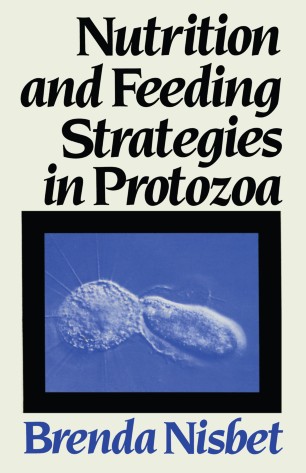 Nutrition and Feeding Strategies in Protozoa

1 Modern biologists describe protozoa as microscopic eukaryotic organ­ isms with a capacity for establishing themselves in almost every con­ ceivable habitat provided it contains moisture in some form. In 1674 at the time when Antony von Leeuwenhoek was making his first observations of 'very small animalcules' in Berkelse Mere near his home town of Delft, this concept of the ubiquity of protozoa would have been difficult to comprehend. Leeuwenhoek's curiosity later led him to examine the body fluids, gut contents and excreta of different animals and to describe 'an inconceivably great company of living animalcules, and these of divers sorts and sizes'. Here were early des­ criptions of parasitic protozoa, species which later came to be recog­ nized as Opalina, Giardia, Trichomonas and others. Following his pioneering work in the field of microscopic observation, knowledge of protozoa has accumulated at an accelerating pace. Some 30,000 living species have been identified, and an equal number of fossil species, from habitats which range from the ocean waters to the exuvial fluid of insects. The study of protozoan nutrition is a particularly interesting aspect of this expanding field of zoology. What kind of nourishment do protozoa need, how do they acqlire it, and what influence do the answers to these two questions havE on where protozoa live? The need to determine what hId of food protozoa are utilizing in their environment is desirable in al ecological studies involving micro­ organisms of aquatic communities.