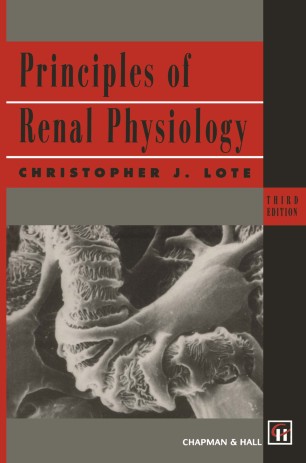 / 7 It is eleven years since the first edition of this book was published and six years since the second edition. There have been many advances in renal physiology over these years, a fact demonstrated by a comparison of the index of this new edition with that of 11 years ago. For example, words in the index of this edition which do not appear in the first edition include atrial natriuretic peptide, dopamine, erythropoietin, nitric oxide and prorenin. For this new edition, there are many completely new sections, includ­ ing a new chapter on tubular transport mechanisms, a section on the bladder and micturition and sections on the renal handling of magne­ sium, renal function in pregnancy and age-related changes in function. The accounts of renin synthesis, the actions of atrial natriuretic peptide and the mechanisms of ammonia secretion, have been rewritten and updated. The presentation of the book for this third edition is also new. The majority of the figures have been redrawn and 'boxes' have been included to present additional material (particularly information of clinical relevance), which can be read separately from the main text. The most popular features of the book - notably its cOllciseness and logical progression through renal physiology - have been retained.