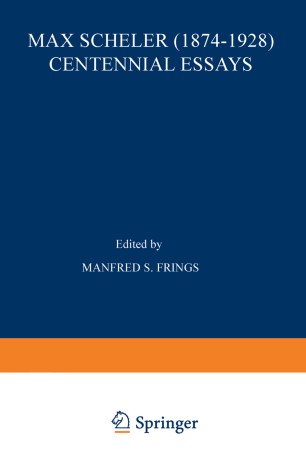 It is the purpose of these essays to commemorate the one hundredth birthday of the philosopher Max Scheler. On this centennial occasion it may be appropriate to recall the first two major works of the philosopher's life. Scheler is known mostly as the author of a monumental work on ethics, entitled: Der Formalismus in der Ethik und die materiale Wertethik (Formalism in Ethics and Non-Formal Ethics of Values), which is the only existing foundation of ethics written by a European philosopher in this century. Although its two parts were published separately (1913/1916) because of circumstances during World War I, all manuscripts had been finished by Scheler prior to the outbreak of the war. His ethics has been translated into various languages, including a recent translation in English. In the same year (1913) Scheler also published another major work which dealt with the phenomenology of sympathetic feelings, and which is translated into English under the title of the enlarged second and following editions: The Nature of Sympathy.