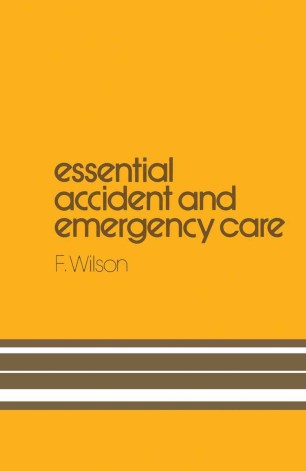 I felt highly honoured when I was asked to write about the achievements of my late brother, Dr Frank Wilson, MB, BS(Lond.), FF ARCS, DA, DCH, who was the editor of and a contributor to this book. Frank graduated in Medicine at St Bartholomew's Hospital Medical College in 1949 at the early age of 22. Born in Lancaster, his one wish was to return to the North. He held house appointments at Preston, spent his two years of National Service in the Royal Air Force and attained the rank of Squadron Leader. While on National Service, his interests turned to anesthetics, and as Senior Medical Officer on H.M. Troopship 'Devonshire', he developed a love for the sea. Convinced that anesthesia was his career, Frank came to Liverpool and attended the University course in this speciality. The vast experi­ ence he gained in anesthesia in the Liverpool Hospitals and on the Thoracic, Cardiac, Neurosurgical and Paediatric units, ensured his continued interest in resuscitation and neonatal anesthesia, which led him to design a new tracheostomy tube when he was at Alder Hey Children's Hospital. He became Lecturer in Anesthesia at the University of Liverpool and later Consultant Anesthetist to Southmead Hospital, Bristol, and then to the Burnley group of hospitals and to Lancaster in 1966.