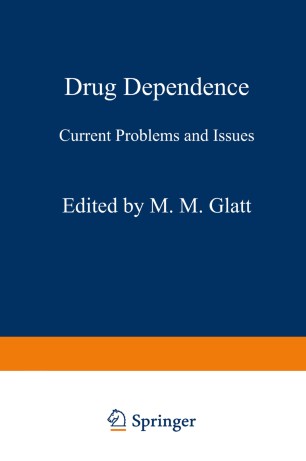 Drug dependence-according to the 1969 W orId Health Organization definition-is 'A state, psychic and sometimes also physical, resulting from the interaction between a living organism and a drug, characte­ rized by behavioural and other responses that always include a com­ pulsion to take the drug on a continuous or periodic basis in order to experience its psychic effects, and sometimes to avoid the discomfort of its absence. Tolerance mayor may not be present. A person may be dependent on more than one drug'. The substitution of the term 'Drug Dependence' in place of the previously employed terms 'Drug Addiction' and 'Drug Habituation' was recommended by a WHO Expert Committee in 1964. It was felt that there had been ongoing confusion in the use of the terms addiction and habituation and in particular, misuse of the term addiction. In 1965 the WHO Expert Committee 'was pleased to note the generally favourable reaction to the recommendations' made in the previous year and the gradual acceptance of the new term. In general, in subsequent years the term 'Drug Dependence' has gained increasing acceptance. Yet it would seem that difficulties may arise whatever term and definition may be used (Glatt, 1974), and although by and large the newer term seems more appropriate than the older definitions, one still often comes across the term' Addiction', and this not only when discussing the matter with laymen or drug misusers themselves.