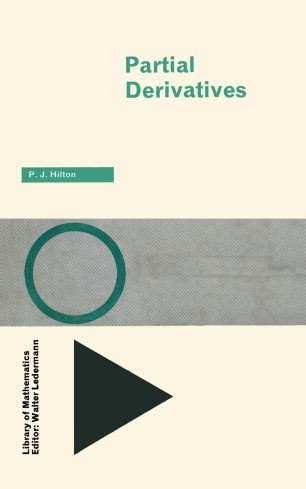 Part of the Library of Mathematics book series (LIMA)

THIS book, like its predecessors in the same series, is in­ tended primarily to serve the needs of the university student in the physical sciences. However, it begins where a really elementary treatment of the differential calculus (e. g. , Dif­ ferential Calculus,t in this series) leaves off. The study of physical phenomena inevitably leads to the consideration of functions of more than one variable and their rates of change; the same is also true of the study of statistics, economics, and sociology. The mathematical ideas involved are des­ cribed in this book, and only the student familiar with the corresponding ideas for functions of a single variable should attempt to understand the extension of the method of the differential calculus to several variables. The reader should also be warned that, with the deeper penetration into the subject which is required in studying functions of more than one variable, the mathematical argu­ ments involved also take on a more sophisticated aspect. It should be emphasized that the basic ideas do not differ at all from those described in DC, but they are manipulated with greater dexterity in situations in which they are, perhaps, intuitively not so obvious. This remark may not console the reader bogged down in a difficult proof; but it may well happen (as so often in studying mathematics) that the reader will be given insight into the structure of a proof by follow­ ing the examples provided and attempting the exercises.