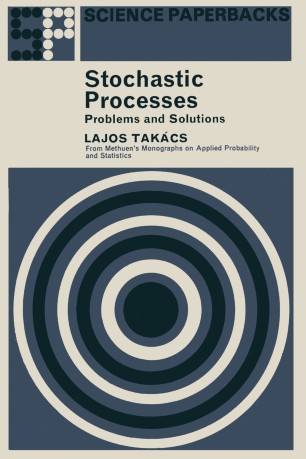 It is not so very long ago that up-to-date text-books on statistics were almost non-existent. In the last few decades this deficiency has largely been remedied, but in order to cope with a broad and rapidly expanding subject many of these books have been fairly big and expensive. The success of Methuen's existing series of monographs, in physics or in biology, for example, stresses the value of short inexpensive treatments to which a student can turn for an introduc­ tion to, or a revision of, specialised topics. In this new Methuen series the still-growing importance of prob­ ability theory in its applied aspects has been recognised by coupling together Probability and Statistics; and included in the series are some of the newer applications of probability theory to stochastic models in various fields, storage and service problems, 'Monte Carlo' techniques, etc. , as well as monographs on particular statistical topics. M. S. BARTLETT ix AUTHOR'S PREFACE The theory of stochastic processes has developed in the last three decades. Its field of application is constantly expanding and at present it is being applied in nearly every branch of science. So far several books have been written on the mathematical theory of stochastic processes. The nature of this book is different because it is primarily a collection of problems and their solutions, and is intended for readers who are already familiar with probability theory.