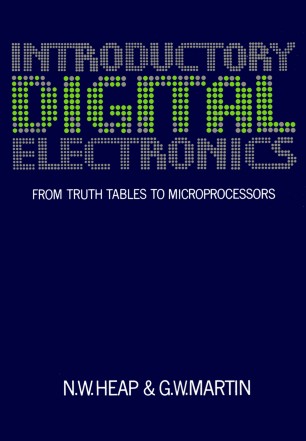 From Truth Tables to Microprocessors

This book is an edited version of part of the teaching text used for the Open University's undergraduate course 'T283 Introductory Electronics', first presented in 1980. The original text was pro­ duced by a course team of nine authors and nine support staff. The team was also responsible for student experimental kits, television and radio programmes. The approach adopted by the course team was to try and teach, where possible, through specification of the problem rather than through discussion of the operation of a selection of available devices and components; since this leads more naturally to modem design strategies such as 'top-down'. The emphasis in the book on the solution of combinational and sequential logic problems by the truth tables and ROMs, rather than logic gates and mapping techniques, illustrates this approach. The book covers topics ranging from logic to microprocessor memory systems and is intended for students with a background in analogue electronics who wish to update their knowledge to include digital electronic systems. Chapter 2 introduces the basic ideas of combinational logic design; truth tables, ROMs, logic gates and Boolean algebra. Chapter 3 deals with sequential logic, and shows how one can design binary and decimal counters and use these to produce a system controller. Chapter 4 examines the system elements needed to interconnect analogue and digital systems.