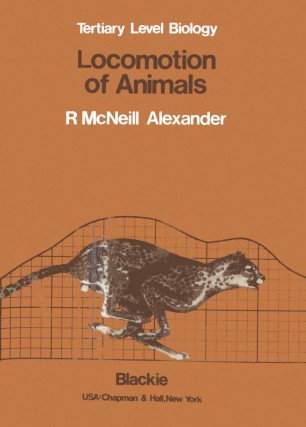 This book is about how animals travel around on land, in water and in the air. It is mainly about mechanisms of locomotion, their limitations and their energy requirements. There is some information about muscle physiology in Chapter 1, but only as much as seems necessary for the discussions of mechanisms and energetics. There is information in later chapters about the patterns of repetitive movement involved, for instance, in different gaits, but nothing about nervous mechanisms of coordination. I have tried to include most ofthe widely-used methods of locomotion, but have not thought it sensible to try to mention every variety of locomotion used by animals. This book is designed for undergraduates, but I hope that other people will also find it interesting. It is possible and sometimes illuminating to use complex mathematics in discussions of animal locomotion. This book includes many equations, but little mathematics. Such mathematics as there is, is simple. Discussions of the mechanisms and energetics of locomotion inevitably involve mechanics. I expect that some readers will know a lot of mechanics, and some hardly any. I have tried to help the latter without boring the former, by putting a summary of the necessary mechanics in an appendix (p. 140). References from the main text to the appendix will tell readers where they can find help, if they need it. Figures and equations in the appendix have numbers distinguished by a prefix A (for instance, Figure A.3).