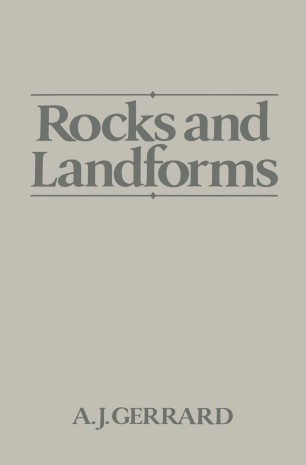 Geomorphology can be defined simply as the study of landforms. Landforms are the result of the interaction between what Ritter (1978) has called the driving and resisting forces. The driving forces or processes are the methods by which energy is exerted on earth materials and include both surface, geomorphological or exogenous processes and subsurface, geological or endogenous processes. The resisting forces are the surface materials with their inherent resistances determined by a complex combination of rock properties. Stated in these simple terms it would be expected that both sides of the equation be given equal weight in syntheses of landform evolution. However, this has not been the case. Until about the 1950s, geomorphology was mainly descriptive and concerned with producing time-dependent models of landscape evolution. Although the form of the land was the main focus, there was little detailed mention of process and scant attention to the properties of surface materials. There were, of course, exceptions. In the late 19th century G.K. Gilbert was stressing the equilibrium between landforms and processes. Many hydrologists were examining the detailed workings of river 'systems and drainage basins, culminating in the classic paper of Horton (1945).