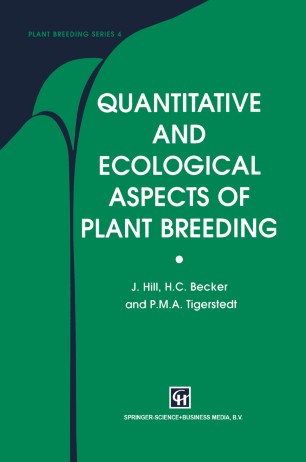 Latest figures suggest that approximately 20% of the world's population of six billion is malnourished because of food shortages and inadequate distrib­ ution systems. To make matters worse, it is estimated that some 75 billion metric tons of soil are removed annually from the land by wind and soil ero­ sion, much of it from agricultural land, which is thereby rendered unsuitable for agricultural purposes. Moreover, out of a total land area under cultivation 9 6 of approximately 1. 5 x 10 ha, some 12 x 10 ha of arable land are destroyed and abandoned worldwide each year because of unsustainable agricultural practices. Add to this the fact that the world population is increasing at the rate of a quarter of a million per day, and the enormity of the task ahead becomes apparent. To quote the eminent wheat breeder E. R. Sears, It seems clear that plant geneticists can look forward to an expanded role in the 21st century, particularly in relation to plant improvement. The suc­ cess of these efforts may go a long way towards determining whether the world's increasing billions of humans will be adequately fed. Food for an ever-increasing population will have to be produced not only from an ever-diminishing, but from what will become an ever-deteriorating land resource unless justifiable environmental concerns are taken into account.