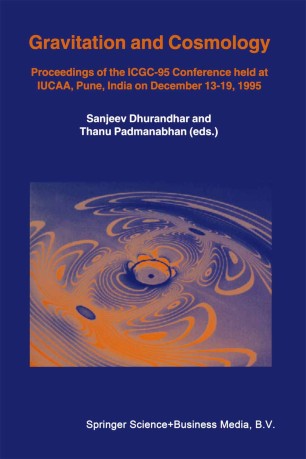 The Relativists and Cosmologists in India organized an international conference in Goa, India, in 1987, known as the International Conference on Gravitation and Cosmology (ICGC-87). Encouraged by the success of this conference it was decided to have such a meeting periodically, once in every four years. Accordingly, ICGC- 91 was held at the Physical Research Laboratory (PRL), Ahmedabad, India. The third International Conference on Gravitation and Cosmology, (ICGC-95) was held at the Inter-University centre for Astronomy and Astrophysics, IUCAA, Pune, India during December 13 - 19, 1995. This series of conferences is co-sponsored by the Indian Association for General Relativity and Gravitation (lAGRG). The Conference had 16 plenary lectures and five workshops altogether. There were three plenary lectures per day and two workshops running parallel each day. We were fortunate in getting plenary speakers who are leading experts in their respective fields drawn from all over the world. The conference was attended by about 105 persons from India and 55 from abroad. We thank all the contributors who have taken time to write up their lectures amidst their busy schedule. We regret we could not get the contributions of a few plenary speakers. We would also like to thank the members of Organizing Committees who have worked hard to make this conference a success.