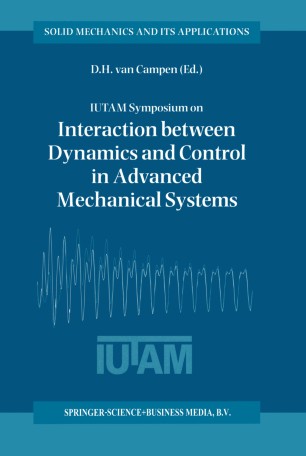 Proceedings of the IUTAM Symposium held in Eindhoven, The Netherlands, 21–26 April 1996

Part of the Solid Mechanics and Its Applications book series (SMIA, volume 52)

During the last decades, applications of dynamical analysis in advanced, often nonlinear, engineering systems have been evolved in a revolutionary way. In this context one can think of applications in aerospace engineering like satellites, in naval engineering like ship motion, in mechanical engineering like rotating machinery, vehicle systems, robots and biomechanics, and in civil engineering like earthquake dynamics and offshore technology. One could continue with this list for a long time. The application of advanced dynamics in the above fields has been possible due to the use of sophisticated computational techniques employing powerful concepts of nonlinear dynamics. These concepts have been and are being developed in mathematics, mechanics and physics. It should be remarked that careful experimental studies are vitally needed to establish the real existence and observability of the predicted dynamical phenomena. The interaction between nonlinear dynamics and nonlinear control in advanced engineering systems is becoming of increasing importance because of several reasons. Firstly, control strategies in nonlinear systems are used to obtain desired dynamic behaviour and improved reliability during operation, Applications include power plant rotating machinery, vehicle systems, robotics, etc. Terms like motion control, optimal control and adaptive control are used in this field of interest. Since mechanical and electronic components are often necessary to realize the desired action in practice, the engineers use the term mechatronics to indicate this field. If the desired dynamic behaviour is achieved by changing design variables (mostly called system parameters), one can think of fields like control of chaos.