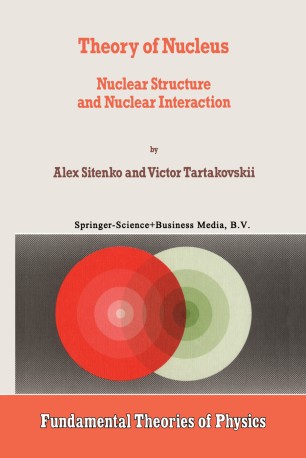 Modern nuclear physics is a well developed branch of physical science, with wide-ranging applications of its results in engineering and industry. At the same time, the development of a consistent theory of nuclei and nuclear processes presents certain problems. It is well known that the most important aim of nuclear physics is the study of nuclear structure and the explanation of properties on the basis of the interaction between nucleons which constitute nuclei. Difficulties of a modern theory of the nucleus are caused by both an insufficient knowledge of nuclear interactions and the multi particle character of nuclear systems. Experimental data on nuclear interactions do not contradict the hypothesis of the pair character of nuclear forces. However, the absence of rigorous meth­ ods of calculations of many particle nuclear systems with strong interaction makes it necessary to use macroscopic nuclear models to describe particular nuclear properties. Nuclear models have been developed in different ways, and the models themselves have been modified and complicated. In spite of the visible discrepancy, different models of the nucleus significantly supple­ ment one another. The development of nuclear models has led to considerable progress in the understanding of atomic nuclei. The current results of theo­ retical nuclear physics are reported in numerous scientific papers. The most important and relevant experimental and theoretical results can be found in many monographs, the best of which are written by well-known experts in the field.