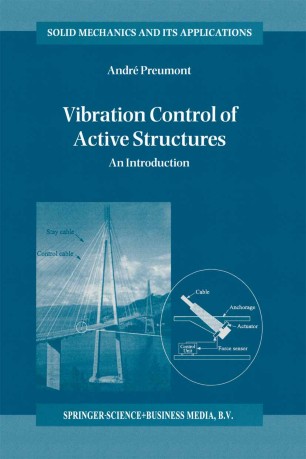 Part of the Solid Mechanics and Its Applications book series (SMIA, volume 50)

I was introduced to structural control by Raphael Haftka and Bill Hallauer during a one year stay at the Aerospace and Ocean Engineering department of Virginia Tech., during the academic year 1985-1986. At that time, there was a tremendous interest in large space structures in the USA, mainly because of the Strategic Defense Initiative and the space station program. Most of the work was theoretical or numerical, but Bill Hallauer was one of the few experimen­ talists trying to implement control systems which worked on actual structures. When I returned to Belgium, I was appointed at the chair of Mechanical Engi­ neering and Robotics at ULB, and I decided to start some basic vibration control experiments on my own. A little later, smart materials became widely available and offered completely new possibilities, particularly for precision structures, but also brought new difficulties due to the strong coupling in their constitutive equations, which requires a complete reformulation of the classical modelling techniques such as finite elements. We started in this new field with the sup­ port of the national and regional governments, the European Space Agency, and some bilateral collaborations with European aerospace companies. Our Active Structures Laboratory was inaugurated in October 1995.