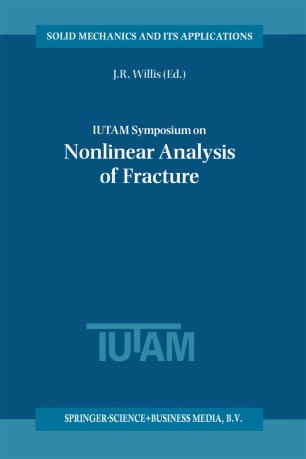 Proceedings of the IUTAM Symposium held in Cambridge, U.K., 3–7 September 1995

Part of the Solid Mechanics and its Applications book series (SMIA, volume 49)

This volume constitutes the Proceedings of the IUTAM Symposium on 'Nonlinear Analysis of Fracture', held in Cambridge from 3rd to 7th Septem­ ber 1995. Its objective was to assess and place on record the current state of understanding of this important class of phenomena, from the standpoints of mathematics, materials science, physics and engineering. All fracture phenomena are nonlinear; the reason for inclusion of this qualification in the title was to reflect the intention that emphasis should be placed on distinctive aspects of nonlinearity, not only with regard to material consti­ tutive behaviour but also with regard to insights gained, particularly from the mathematics and physics communities, during the recent dramatic ad­ vances in understanding of nonlinear systems in general. The expertise represented in the Symposium was accordingly very wide, and many of the world's greatest authorities in their respective fields participated. The Symposium remained focussed on issues of practical significance for fracture phenomena, with concentration on aspects that are still im­ perfectly understood. The most significant unifying issue in this regard is that of scale: this theme was addressed from several perspectives. One important aspect is the problem of passing information on one scale up or down, as an input for analysis at another scale. Although this is not always the case, it may be that the microscopic process of fracture is understood in some particular class of materials.