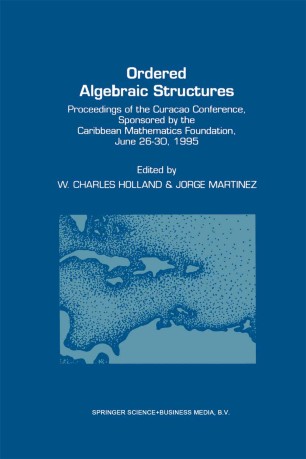 Proceedings of the Curaçao Conference, sponsored by the Caribbean Mathematics Foundation, June 26–30, 1995

The conference on Ordered Algebraic Structures held in Curat;ao, from the 26th of June through the 30th of June, 1995, at the Avila Beach Hotel, marked the eighth year of ac­ tivities by the Caribbean Mathematics Foundation (abbr. CMF), which was the principal sponsor of this conference. CMF was inaugurated in 1988 with a conference on Ordered Algebraic Structures. During the years between these two conferences the field has changed sufficiently, both from my point of view and, I believe, that of my co-organizer, W. Charles Holland, to make one wonder about the label "Ordered Algebraic Structures" itself. We recognized this from the start, and right away this conference carried a subtitle, or, if one prefers, an agenda: we concentrated on the one hand, on traditional themes in the theory of ordered groups, including model-theoretic aspects, and, on the other hand, on matters in which topology (more precisely C(X)-style topology) and category theory would play a prominent role. Plainly, ordered algebra has many faces, and it is becoming increas­ ingly difficult to organize an intimate conference, such as the ones encouraged in the series sponsored by CMF, in this area on a broad set of themes. These proceedings reflect, accurately we think, the spirit of the conferees, but it is not a faithful record of the papers presented at the conference.