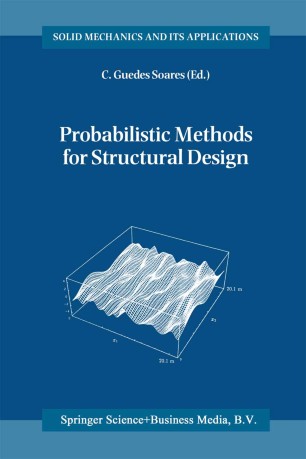 Part of the Solid Mechanics and Its Applications book series (SMIA, volume 56)

This book contains contributions from various authors on different important topics related with probabilistic methods used for the design of structures. Initially several of the papers were prepared for advanced courses on structural reliability or on probabilistic methods for structural design. These courses have been held in different countries and have been given by different groups of lecturers. They were aimed at engineers and researchers who already had some exposure to structural reliability methods and thus they presented overviews of the work in the various topics. The book includes a selection of those contributions, which can be of support for future courses or for engineers and researchers that want to have an update on specific topics. It is considered a complement to the existing textbooks on structural reliability, which normally ensure the coverage of the basic topics but then are not extensive enough to cover some more specialised aspects. In addition to the contributions drawn from those lectures there are several papers that have been prepared specifically for this book, aiming at complementing the others in providing an overall account of the recent advances in the field. It is with sadness that in the meanwhile we have seen the disappearance of two of the contributors to the book and, in fact two of the early contributors to this field.