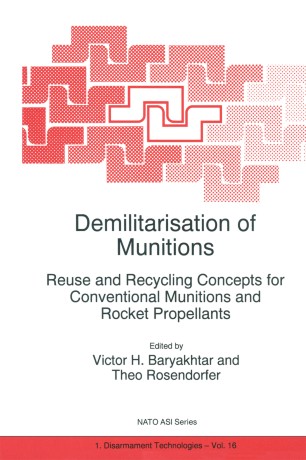 Reuse and Recycling Concepts for Conventional Munitions and Rocket Propellants

Hitherto the disposal of munitions was mostly concerned with obsolete stocks, but the political developments in the states of the former Soviet Union have necessitated the disposal of vast quantities of current and obsolete stocks. Obviously, open burning/open detonation cannot be used on such a large scale, not least for environmental considerations.
There are two main technical problems associated with the disposal of munitions on the scale required. First, the materials are not simple wastes or rubbish. Their handling, storage, packaging and transportation are subject to very rigid regulation, and justifiably so, for obvious reasons. Second, they are very valuable goods, for which a high price has been paid by the holding states' economic systems. Mere destruction would mean the irretrievable loss of the value invested. But therein lies the problem. Goods like steel or brass scrap can easily be reclaimed, but hypergols and other rocket fuels (for instance) represent a true chemical challenge, while, under certain conditions, explosives may be diverted to civilian use. This, in summary, is the problem that the present book deals with: the two-pronged attack involving demilitarization and recycling technologies.