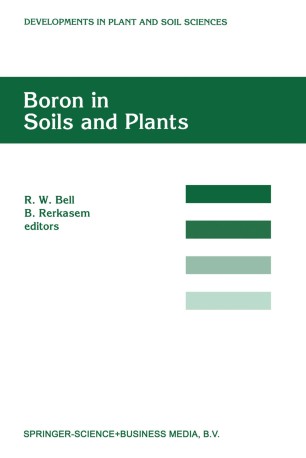 Boron in Soils and Plants

Proceedings of the International Symposium on Boron in Soils and Plants held at Chiang Mai, Thailand, 7–11 September, 1997

Part of the Developments in Plant and Soil Sciences book series (DPSS, volume 76)

The economic significance of boron (B) in agriculture, horticulture, and forestry has been beyond dispute for several decades. Even in the last two decades, the areas where B deficiency limits plant production has grown with increased reports from China, south Asia and southeast Asia. The present volume is reflective of the growing awareness of the significance of low soil B with reports from Australia, Bangladesh, Brazil, north, central and southern China, India, Nepal, and the North West Frontier Province of Pakistan contained herein. Boron deficiency also continues to be a problem for crop yield and quality in areas where B deficiency has been known for some time, for example in Germany and the USA. The problem of low soil B is not limited to effects on field crop yield, with papers reporting on depressed wood yield and quality in timber trees (Lambert et al. ), and depressed fruit quality (Dong et al. ; Smith et al. : Zude et al. ) also appearing in the present volume. Globally, Shorrocks (1997)1 estimates that ?? tonnes of B fertiliser is applied annually in agriculture. The economic benefits from the use of B fertiliser have not been quantified but are clearly enormous. Paradoxically, the clear economic imperatives for using B fertiliser on low B soils are not matched by a similar clarity of understanding of the role and functions of B in plants.