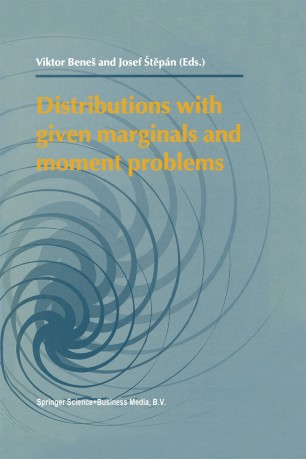 Distributions with given Marginals and Moment Problems

The last decade has seen a remarkable development of the "Marginal and Moment Problems" as a research area in Probability and Statistics. Its attractiveness stemmed from its lasting ability to provide a researcher with difficult theoretical problems that have direct consequences for appli­ cations outside of mathematics. The relevant research aims centered mainly along the following lines that very frequently met each other to provide sur­ prizing and useful results : -To construct a probability distribution (to prove its existence, at least) with a given support and with some additional inner stochastic property defined typically either by moments or by marginal distributions. -To study the geometrical and topological structure of the set of prob­ ability distributions generated by such a property mostly with the aim to propose a procedure that would result in a stochastic model with some optimal properties within the set of probability distributions. These research aims characterize also, though only very generally, the scientific program of the 1996 conference "Distributions with given marginals and moment problems" held at the beginning of September in Prague, Czech Republic, to perpetuate the tradition and achievements of the closely related 1990 Roma symposium "On Frechet Classes" 1 and 1993 Seattle" AMS Summer Conference on Marginal Problem".