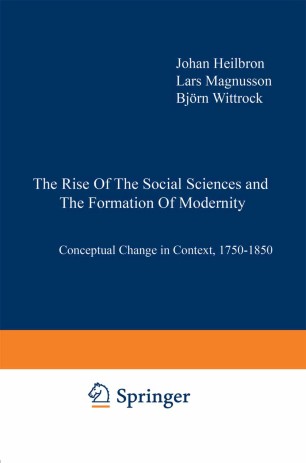 The Rise of the Social Sciences and the Formation of Modernity

Part of the Sociology of the Sciences book series (SOSC, volume 20)

This volume offers one of the first systematic analyses of the rise of modern social science. Contrary to the standard accounts of various social science disciplines, the essays in this volume demonstrate that modern social science actually emerged during the critical period between 1750 and 1850. It is shown that the social sciences were a crucial element in the conceptual and epistemic revolution, which parallelled and partly underpinned the political and economic transformations of the modern world.
From a consistently comparative perspective, a group of internationally leading scholars takes up fundamental issues such as the role of the Enlightenment and the French Revolution in the shaping of the social sciences, the changing relationships between political theory and moral discourse, the profound transformation of philosophy, and the constitution of political economy and statistics.