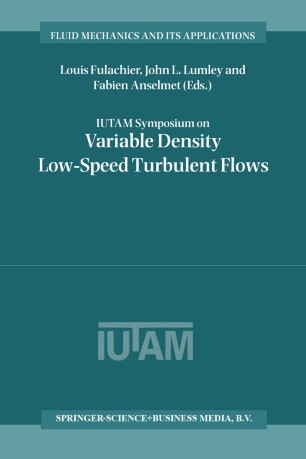 Proceedings of the IUTAM Symposium held in Marseille, France, 8–10 July 1996

Part of the Fluid Mechanics and Its Applications book series (FMIA, volume 41)

The General Assembly of the International Union of Theoretical and Applied Mechanics in its meeting on August 28, 1994, selected for 1996 only four Mechanics Symposia, of which ours is the only one related to Fluid Mechanics: Variable Density Low Speed Turbulent Flows. This IUTAM Symposium, organized by the Institut de Recherche sur les Phenomenes Hors Equilibre (Marseille), is the logical continuation of the meetings previously organized or co-organized - on the French or European level, such as Euromech 237, Marseille, 1988 - by the same research group ofMarseille. This meeting focused specifically on the structure of turbulent flows in which density varies strongly : the effect of this variation on the velocity and scalar fields is in no sense negligible. We were mainly concerned with low-speed flows subjected to strong local changes of density as a consequence of heat or mass transfer or of chemical reactions. Compressible turbulent flows - such a!" supersonic ones - were also considered in order to underline their similarities to and their differences from low-speed variable density flows.