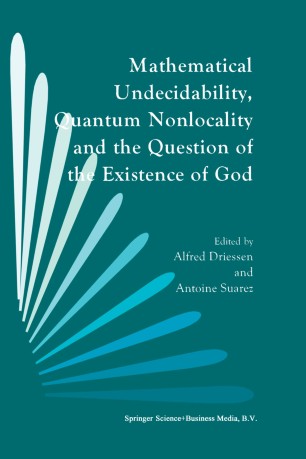 Mathematical Undecidability, Quantum Nonlocality and the Question of the Existence of God

On January 22, 1990, the late John Bell held at CERN (European Laboratory for Particle Physics), Geneva a seminar organized by the Center of Quantum Philosophy, that at this time was an association of scientists interested in the interpretation of quantum mechanics. In this seminar Bell presented once again his famous theorem. Thereafter a discussion took place in which not only physical but also highly speculative epistemological and philosophical questions were vividly debated. The list of topics included: assumption of free will in Bell's theorem, the understanding of mind, the relationship between the mathematical and the physical world, the existence of unobservable causes and the limits of human knowledge in mathematics and physics. Encouraged by this stimulating discussion some of the participants decided to found an Institute for Interdisciplinary Studies (lIS) to promote philosoph­ ical and interdisciplinary reflection on the advances of science. Meanwhile the lIS has associated its activities with the Swiss foundation, Fondation du Leman, and the Dutch foundation, Stichting Instudo, registered in Geneva and Amsterdam, respectively. With its activities the lIS intends to strengthen the unity between the professional activities in science and the reflection on fun­ damental philosophical questions. In addition the interdisciplinary approach is expected to give a contribution to the progress of science and the socio­ economic development. At present three working groups are active within the lIS, i. e. : - the Center for Quantum Philosophy, - the Wealth Creation and Sustainable Development Group, - the Neural Science Group.