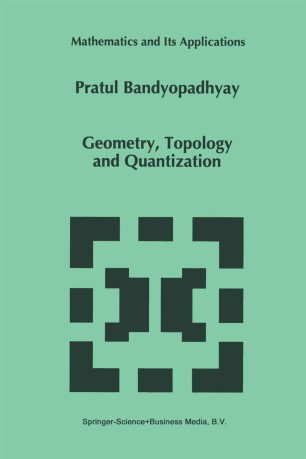 Part of the Mathematics and Its Applications book series (MAIA, volume 386)

This is a monograph on geometrical and topological features which arise in various quantization procedures. Quantization schemes consider the feasibility of arriving at a quantum system from a classical one and these involve three major procedures viz. i) geometric quantization, ii) Klauder quantization, and iii) stochastic quanti­ zation. In geometric quantization we have to incorporate a hermitian line bundle to effectively generate the quantum Hamiltonian operator from a classical Hamil­ tonian. Klauder quantization also takes into account the role of the connection one-form along with coordinate independence. In stochastic quantization as pro­ posed by Nelson, Schrodinger equation is derived from Brownian motion processes; however, we have difficulty in its relativistic generalization. It has been pointed out by several authors that this may be circumvented by formulating a new geometry where Brownian motion proceses are considered in external as well as in internal space and, when the complexified space-time is considered, the usual path integral formulation is achieved. When this internal space variable is considered as a direc­ tion vector introducing an anisotropy in the internal space, we have the quantization of a Fermi field. This helps us to formulate a stochastic phase space formalism when the internal extension can be treated as a gauge theoretic extension. This suggests that massive fermions may be considered as Skyrme solitons. The nonrelativistic quantum mechanics is achieved in the sharp point limit.