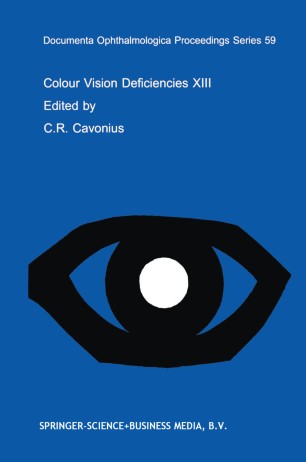 Proceedings of the thirteenth Symposium of the International Research Group on Colour Vision Deficiencies, held in Pau, France July 27–30, 1995

The 13th biennial Symposium of the International Research Group on Colour Vision Deficiencies was held from 27 July to 30 July, 1995, in the splendidjin de siecle Theatre Saint Louis, in Pau, France. A total of 80 papers and posters were presented during the four days, of which 56 have been selected for inclusion in this volume. Each has been reviewed by two of the Editors. Additionally, in numerous cases in which specialized knowledge was called for the Editors asked for external help; their assistance is acknowledged below. While Pau now exists largely on agriculture and, more recently, oil extraction and refining, a century ago it was a winter resort that rivalled Cannes and Nice; indeed, Baedeker judged the air of Pau to be preferable for those of a nervous disposition. Pau and the surrounding Beam district are rich in history and have close ties to the Basque region, both of which were exploited brilliantly by the local organizers, Doctors Jean and Veronique Lied, to introduce the partici­ pants to the gastronomy and traditions of the region. The Committee of the IRGCVD owe a great debt of gratitude to the external reviewers, Oscar Estevez, Karl Gegenfurtner, Gunilla Haegerstrom-Portnoy, RL. Hilz, John Krauskopf, Anne Kurtenbach, Barry B. Lee, Adam Reeves, Marilyn Schneck, L.T. Sharpe, Eugene Switkes, Wayne Verdon, and B.A.