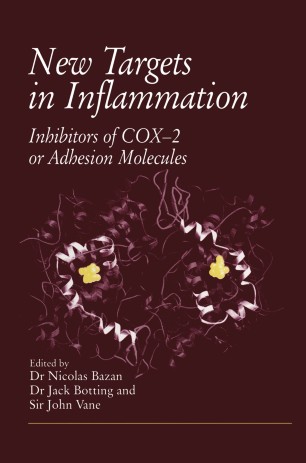 Inhibitors of COX-2 or Adhesion Molecules Proceedings of a conference held on April 15–16, 1996, in New Orleans, USA, supported by an educational grant from Boehringer Ingelheim

For the past 100 years the mainstay of therapy for rheumatoid arthritis (RA) has been aspirin or other drugs of the non-steroid anti-inflammatory group. In 1971 Vane pro­ posed that both the beneficial and toxic actions of these drugs was through inhibition of prostaglandin synthesis. The recent discovery that prostaglandins responsible for pain and other symptoms at inflammatory foci are synthesized by an inducible cyclooxygenase (COX-2) that is encoded by a gene distinct from that of the consti­ tutive enzyme (COX-I) provided a new target for therapy of RA. A drug that would selectively inhibit COX-2 would hopefully produce the symptomatic benefit provided by existing NSAIDs without the gastrointestinal and renal toxicity due to the inhibition of COX-I. Drugs selective for COX-2 are now available. Experimental studies have shown them to be effective with minimal toxicity, and in clinical trials gastric and renal toxicities are less. Highly selective COX-2 inhibitors, perhaps designed with knowledge of the crystal structures of COX-I and COX-2, are also available. Other experimental studies, including those in animals lacking effective genes for COX-lor COX-2 and in experimental carcinomas, suggest there is still much to be learned of the pathophysiological functions of these enzymes. The inflammatory response is a complex reaction involving many mediators that derive from white blood cells, endothelial cells and other tissues. Preliminary data have revealed that inhibitors of the cytokines and adhesion molecules that play a crucial role in the migration of white cells to inflammatory sites may be useful in RA.