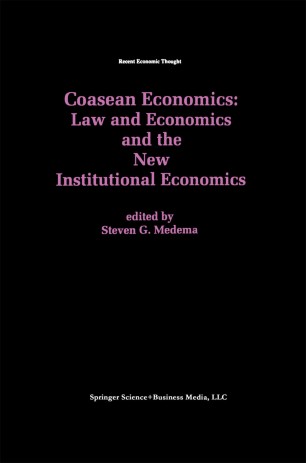 Coasean Economics Law and Economics and the New Institutional Economics

Upon hearing that Ronald Coase had been awarded the Nobel Prize, a fellow economist's first response was to ask with whom Coase had shared the Prize. Whether this response was idiosyncratic or not, I do not know; I expect not. Part of this type of reaction can no doubt be explained by the fact that Coase has often been characterized as an economist who wrote only two significant or influential papers: "The Nature of the Firm" (1937) and "The Problem of Social Cost" (1960). And by typical professional standards of "significant" and "influential" (i. e. , widely read and cited), this perception embodies a great deal of truth, even subsequent to Coase's receipt of the Prize. This is not to say that there have not been other important works - "The Marginal Cost Controversy" (1946) and "The Lighthouse in Economics" (1974) come immediately to mind here - only that in a random sample of, say, one hundred economists, one would likely find few who could list a Coase bibliography beyond the two classic pieces noted above, in spite of Coase's significant publication record. ' The purpose of this collection is to assess the development of, tensions within, and prospects for Coasean Economics - those aspects of economic analysis that have evolved out of Coase's path-breaking work. Two major strands of research can be identified here: law and economics and the New Institutional Economics.