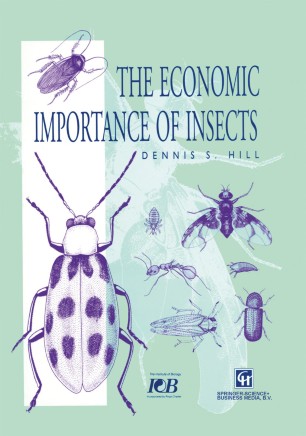 The Economic Importance of Insects

In the last few decades there has been an ever-increasing component in most BSc Zoology degree courses of cell biology, physiology and genetics, for spectacular developments have taken place in these fields. Some aspects of biotechnology are now also being included. In order to accommodate the new material, the old zoology courses were altered and the traditional two-year basis of systematics of the animal kingdom, comparative anatomy (and physiology) and evolution, was either severely trimmed or reduced and presented in an abridged form under another title. Soon after these course alterations came the swing to modular teaching in the form of a series of shorter, separate courses, some of which were optional. The entire BSc degree course took on a different appearance and several different basic themes became possible. One major result was that in the great majority of cases taxonomy and systematics were no longer taught and biology students graduated without this basic training. We field biologists did appreciate the rising interest in ecology and environ­ mental studies, but at the same time lamented the shortage of taxonomic skills, so that often field work was based on incorrect identifications. For years many of us with taxonomic inclinations have been bedevilled by the problem of teaching systematics to undergraduates. At a guess, maybe only 5% of students find systematics interesting. It is, however, the very basis of all studies in biology - the correct identification of the organism concerned and its relationships to others in the community.