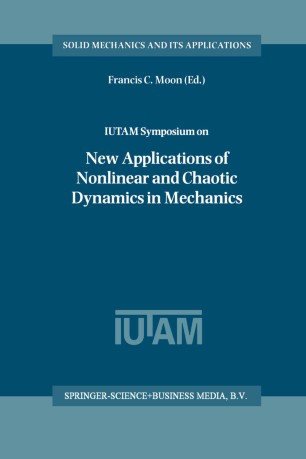 Part of the Solid Mechanics and its Applications book series (SMIA, volume 63)

It is two decades since Mitchell Feigenbaum's landmark papers on period doubling and the modern beginnings of what is now called "Chaos Theory". From the very beginning, mechanics has been a central focus for modem nonlinear dynamical systems. Fluid, structural, machine and rigid body dynamics has been a fertile field for nonlinear phenomena and chaos in particular. Early experimental evidence for chaotic phenomena in mechanics gave the new chaos theory a mark of credibility, importance, and relevance that its earlier sister field, catastrophe theory, did not achieve. The fact that mechanics straddles both physics and engineering also meant that mechanics became a pathway for direct application of chaos theory to applied problems. So what is new in nonlinear dynamics and mechanics today? First the scope of applications in solid mechanics has broadened to cover material processing, inelasticity and fracture mechanics. In rigid body dynamics, more complex systems such as vehicles, robotics and controlled machines have come into the purview of nonlinear dynamicists. On the mathematics side of nonlinear dynamics, it is now recognized that spatio-temporal problems, hysteretic and time delay problems are the new frontiers in this field. Also the term "complexity" has been added to the lexicon of chaos theory to describe the dynamics of many interacting sub systems which can exhibit self organization and evolution. Complexity analysis has gained a foothold in biological and some social sciences as well in fluid and chemical physics.