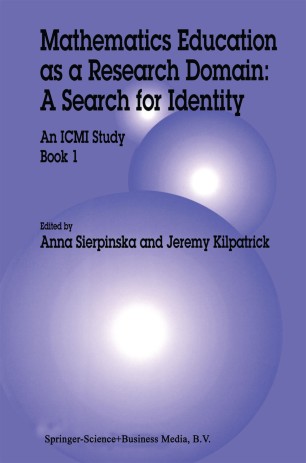 Mathematics Education as a Research Domain: A Search for Identity

No one disputes how important it is, in today's world, to prepare students to un­ derstand mathematics as well as to use and communicate mathematics in their future lives. That task is very difficult, however. Refocusing curricula on funda­ mental concepts, producing new teaching materials, and designing teaching units based on 'mathematicians' common sense' (or on logic) have not resulted in a better understanding of mathematics by more students. The failure of such efforts has raised questions suggesting that what was missing at the outset of these proposals, designs, and productions was a more profound knowledge of the phenomena of learning and teaching mathematics in socially established and culturally, politically, and economically justified institutions - namely, schools. Such knowledge cannot be built by mere juxtaposition of theories in disci­ plines such as psychology, sociology, and mathematics. Psychological theories focus on the individual learner. Theories of sociology of education look at the general laws of curriculum development, the specifics of pedagogic discourse as opposed to scientific discourse in general, the different possible pedagogic rela­ tions between the teacher and the taught, and other general problems in the inter­ face between education and society. Mathematics, aside from its theoretical contents, can be looked at from historical and epistemological points of view, clarifying the genetic development of its concepts, methods, and theories. This view can shed some light on the meaning of mathematical concepts and on the difficulties students have in teaching approaches that disregard the genetic development of these concepts.