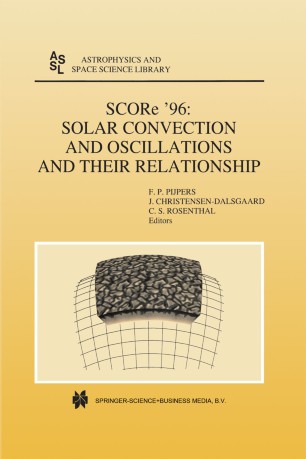 SCORe ’96: Solar Convection and Oscillations and their Relationship

This volume contains the reviews and poster papers presented at the workshop Solar Convection and Oscillations and their Relationship: SCORe '96, held in Arhus, Denmark, May 27 - 31, 1996. The aim of this workshop was to bring together experts in the fields of convection and helioseismology, and to stimulate collaborations and joint research. The participation to this workshop was purposely kept limited in order to provide optimal conditions for informal discussions. In autumn of 199,5 the long-awaited GONG network of solar telescopes became fully operational and the first data already show significant improvement over existing datasets on solar oscillations. Furthermore, in December of 1995 the satellite SOHO was launched which, together with GONG, provides a major step forward in both the quantity and the quality of available solar oscillation data. It is with this in mind that we decided to organize the workshop to prepare for the optimal use of this wealth of data, with which to deepen our understanding of solar structure and specifically, of one of the longest-standing problems in solar and stellar modelling: the treatment of convection.