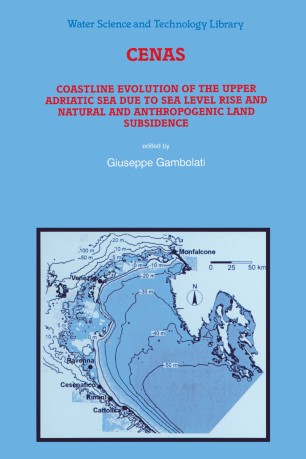 The Upper Adriatic Sea basin comprises a very precarious coastal environment subject to continuous changes which prove appreciable not only over the geological scale but also in historical and modern times. According to some Authors the Venice Lagoon was formed 2000-3000 years ago, and other lagoons (e. g. the Grado Lagoon in the northernmost part of the Adriatic) are even more recent. In addition to lagoons, the Upper Adriatic coastal area includes salt and fresh-water marshes and reclaimed land separated by several watercourses originating from the Alpine and Apennine ranges with a ground elevation not exceeding in many places 2 m above the mean sea l. evel (msl). A significant fraction of this lowland is already now below msl because of natural and anthropogenic land subsidence, land reclamation and sea level rise occurred over the last century. Natural land subsidence is still under way as a result of deep downward tec­ tonic movement and consolidation of soils deposited in the most recent time. An­ thropogenic subsidence is primarily due to groundwater pumping for agricultural, industrial, civil, and tourist use, and to gas withdrawal from a large number of gas fields scattered through the Upper Adriatic basin, and may still continue, al­ though at a reduced rate, in the years to come. At the same time msl is expected to rise in the next century due to global climate change, mainly because of the greenhouse effect.