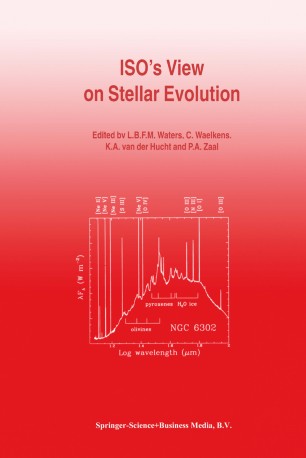 Volume 255, 1997/1998 An International Journal of Astronomy, Astrophysics and Space Science

The successful launch on November 17, 1995 of ESA's Infrared Space Observatory (ISO) by means of an Ariane 4 carrier, has set in motion a true revolution in quantitative infrared astronomy. For the first time since the very successful IRAS mission in 1983, the astronomical community has uninterrupted access to the infrared part of the electromagnetic spectrum. The four focal plane instruments on board of ISO ( the camera ISOCAM, the photometerjcamera ISOPHOT, and the short and long wavelength spec­ trographs ISO-SWS and ISO-LWS), perform very well and live up to the high expectations all of us had at launch. In the spring of 1996, Thijs de Graauw (principal investigator of the SWS) first suggested the idea to organize a conference dedicated to ISO re­ sults in the area of stars and circumstellar matter, and coined the title ISO 's View on Stellar Evolution. At the first scientific meeting to highlight some of the early ISO results which was held in May of 1996 at ESA's laboratory ESTEC in Noordwijk, the Netherlands, the conference was announced and a preliminary science organizing committee was formed. The conference was held from July 1 to 4, 1997, in conference centre de Leeuwenhorst, Noord­ wijkerhout, the Netherlands. The conference was opened by the Director of ESA 's Science Programme, Professor R. Bonnet.