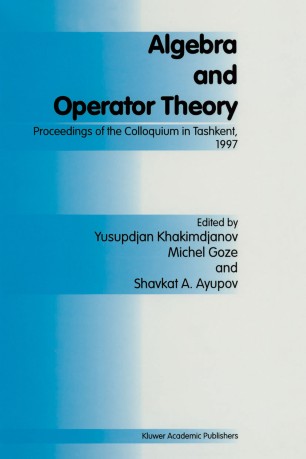 Proceedings of the Colloquium in Tashkent, 1997

This volume presents the lectures given during the second French-Uzbek Colloquium on Algebra and Operator Theory which took place in Tashkent in 1997, at the Mathematical Institute of the Uzbekistan Academy of Sciences. Among the algebraic topics discussed here are deformation of Lie algebras, cohomology theory, the algebraic variety of the laws of Lie algebras, Euler equations on Lie algebras, Leibniz algebras, and real K-theory. Some contributions have a geometrical aspect, such as supermanifolds. The papers on operator theory deal with the study of certain types of operator algebras. This volume also contains a detailed introduction to the theory of quantum groups.
Audience: This book is intended for graduate students specialising in algebra, differential geometry, operator theory, and theoretical physics, and for researchers in mathematics and theoretical physics.