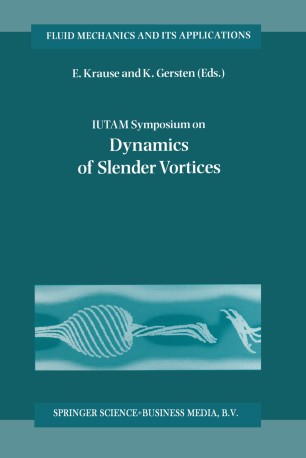 Part of the Fluid Mechanics and Its Applications book series (FMIA, volume 44)

The decision of the General Assembly of the International Union of Theoretical and Applied Mechanics to organize a Symposium on Dynamics of Slender Vortices was greeted with great enthusiasm. The acceptance of the proposal, forwarded by the Deutsches Komitee fiir Mechanik (DEKOMECH) signalized, that there was a need for discussing the topic chosen in the frame the IUTAM Symposia offer. Also the location of the symposium was suitably chosen: It was decided to hold the symposium at the RWTH Aachen, where, years ago, Theodore von Karman had worked on problems related to those to be discussed now anew. It was clear from the beginning of the planning, that the symposium could only be held in the von Karman-Auditorium ofthe Rheinisch-Westfalische Technische Hochschule Aachen, a building named after him. The symposium was jointly organized by the editors of this volume, strongly supported by the local organizing committee. The invitations of the scientific committee brought together scientists actively engaged in research on the dynamics of slender vortices. It was the aim of the committee to have the state of the art summarized and also to have the latest results of specific problems investigated communicated to the participants of the symposium. The topics chosen were asymptotic theories, numerical methods, vor­ tices in shear layers, interaction of vortices, vortex breakdown, vortex sound, and aircraft and helicopter vortices.