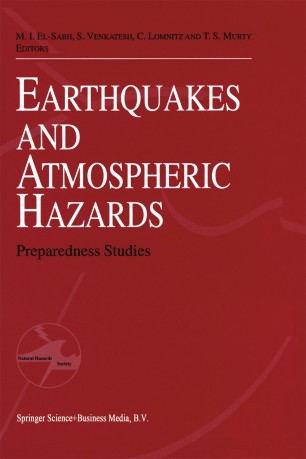 Earthquakes and Atmospheric Hazards contains a selection of papers that were presented as part of the Sixth International Symposium on Natural and Man-Made Hazards (HAZARDS-96) held in Toronto, Canada during July, 1996. The Symposium was very timely, given the large number of natural disasters that have occurred in various parts of the world during the 1990s, the United Nations' International Decade for Natural Disaster Reduction (IDNDR). The human reaction to these disasters has varied widely from one event to the next and the economic and social costs have been immense with damage running into billions of dollars. Having in everyone's mind the Northridge, California (1994) and the Kobe, Japan (1995) earthquakes, the volcanoes in the Philippines, the cyclones and related storm surges in Bangladesh, and the floods in North America and Europe caused by heavy rains, the Symposium attracted more than one hundred papers covering various aspects of these events. The eleven papers included in this volume deal with the scientific and management issues of those earthquakes and atmospheric hazards that occurred during the late 1990s, with emphasis on the preparedness aspects. A summary report of the HAZARDS-96 Symposium and recommendations adopted by the participants is also included.
Earthquakes and Atmospheric Hazards forms an excellent reference for scientists, students, engineers, the insurance industry, authorities specializing in public safety and natural hazards preparedness and mitigation plans.