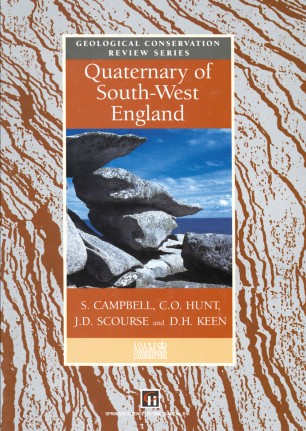 STRUCTURE OF THE VOLUME AND TERMINOLOGY USED This book contains scientific descriptions of 63 localities (Figure A) of at least national importance for Quaternary geology, geomorphology and environmental change in South-West England. These sites were selected by the Geological Conservation Review and are accordingly designated 'GCR' sites. Chapter 1 provides an introduction to the Quaternary. Chapter 2 synthesizes the geomorphological development and Quaternary history of the region, and outlines the principles involved in site selection. The individual GCR site descriptions form the core of the book. In the following chapters, sites are arranged and described in broad geographic areas and by research topic. This is necessitated by the widely disparate nature of the field evidence in Soutb­ West England: sites demonstrating the full range of Quaternary and geomorphological features are not evenly and conveniently dispersed throughout the region, and some areas have significant gaps. Neither do the individual chapters contain sites that neces­ sarily equate with particular site selection networks. Rather, the chosen chapter headings provide the least repetitive means of describing the sites and background material. Where possible, a chronological approach, from oldest to youngest, has been used to describe sites within a given chapter. Again, this approach is not always possi­ ble, and a group of sites may show variations on landform or Stratigraphie evidence broadly within one major time interval or chronostratigraphic stage; inevitably there are many overlaps.